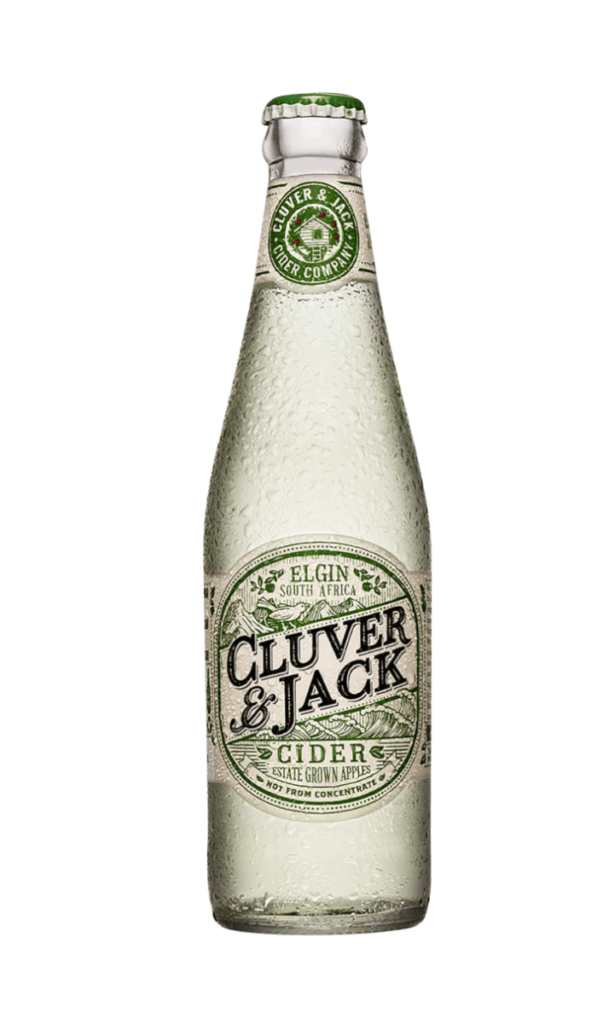 The Cluvers and the Jacks

The Cluver family own De Rust Farm in Elgin and have done so for five generations. Pioneers of community upliftment, they grow delicious apples and top quality grapes, which under the Paul Cluver label, make some of South Africa’s best wines.

Bruce Jack’s great-grandfather was one of the first to plant cider apple trees in South Africa.

The Cluver & Jack ciders are made in the Paul Cluver Winery, using a generations-old Jack family methodology.

Paul Cluver and Bruce Jack have been friends for many years and continue to play pivotal roles in the South African wine industry. They have long-planned to craft a very special cider and so revive old family traditions.

How do we do it

Farming on our scale and with our principles isn’t glamourous. It’s hard work and sometimes it’s heartbreaking. But this is balanced by a deeply rewarding life. What you see, is what you get. Actions have consequences.

Our carefully grown apples are hand-picked from the tree, not off the ground, where they soon start to rot. They are chopped up into little pieces in a hopper and then pressed in a specially designed belt press, which slowly squeezes all the juice out.

This juice is gravity-clarified in chilled tanks, rather than forced through a filter. This naturally clarified juice is then allowed to ferment at cool temperatures, so we capture the intrinsic elements and aromas in the apple juice.

After fermentation, we filter out the spent yeast cells, and that’s basically it. Because this is a natural process we don’t have to force-chill the cider (with consequential huge energy loss), or further manipulate the cider to remove protein or tannin. It comes out of the fermentation process ready to bottle. This fermentation process is not very complicated. All the really hard work is done in the orchard.

Finally, we capture the bottles of joy with a sparkling of CO2, which adds a captivating, celebratory fizz.

Because of our hand-crafted philosophy, our authentic cider is tastier, fresher, crisper, dryer and much, much longer lasting than high volume, commercial ciders. And with real cider, you can hear the trees talk.

Can you store it?

This cider is crafted to last and will develop beautifully in the bottle for at least five years, gaining subtle complexity as it ages. We suggest you put some away in your cellar, if you can resist not drinking it all up immediately.

What apples are used?

The foundation variety of our “Everyday” cider is Granny Smith, the other varieties are a secret.

Is it Gluten Free?

Cider is a fantastic match for food as any West countryman, Norman or Breton will tell you. If a dish goes with white wine it will generally go with cider.

There are many different styles, obviously but here are the type of dishes I think suit cider best.

Creamy or cider-based sauces
It’s much more helpful to focus on the way something is cooked and the sauce that goes with it rather than the base ingredient such as chicken or pork which can be cooked so many different ways. Think of the kind of sauces you find in Normandy which, of course is cider’s heartland. And of chicken casseroles or pies cooked with cider and sausages with cider (in fact any dish cooked with onion and apples). All obvious pairings.

Ham and other cold cuts.

Hot or cold. Cider is a good partner for boiled or roast gammon (and can also be used in the cooking liquid) and lovely with fat chunks of ham cut off the bone. It’s also tops with other pork-based products like patés, terrines and rillettes (without too much garlic), brawn, Melton Mowbray (and other) pork pies and Scotch eggs.

Braai’s and BBQ’s
Especially with grilled chicken or pork. Don’t overdo the spicy marinades though.

Salads
Particularly those based on chicken, ham or cheese with a light creamy dressing.

Brittany/Normandy style savoury crepes
A terroir-based match. I particularly like buckwheat pancakes filled with ham or spinach and cheese and a sparkling cider.

Cheese
A great area to explore. Camembert and Camembert-style cheeses are the outstanding pairings but Cheddar and other English territorial cheeses such as Cheshire and Caerphilly, semi-hard cheeses like Gruyère, Beaufort and Appenzeller are all good. Pick a drier, lighter cider with goats’ cheese and a slightly sweeter one with washed rind cheeses like Pont L’Eveque and Stinking Bishop (neither of which should be matured to the point where they’re running off the cheeseboard) or a mellow, creamy blue. Cooked dishes like cauliflower cheese work with cider too.

Pheasant and other feathered game
This is more speculative territory but I have a feeling more rustic, dry unfiltered ciders would go with dishes like pot roast pheasant with apples in much the same way as a Gueuze.

Mild curries
You could also try a medium dry cider with spicy Indian snacks or with a mild curry like a korma.

Sweet and sour pork
So long as the ‘sweet’ element wasn’t too sweet and the cider had some sweetness of its own.

Basque style dishes with pimenton (paprika) and peppers
The Basque country either side of the Spanish border is also a big cider drinking area so it stands to reason they must drink it with Basque cuisine. Definitely worth trying.

Apple based cakes and puddings
Great with sweeter ciders. Try an apple pie made with cheese with a dessert cider. Brilliant!