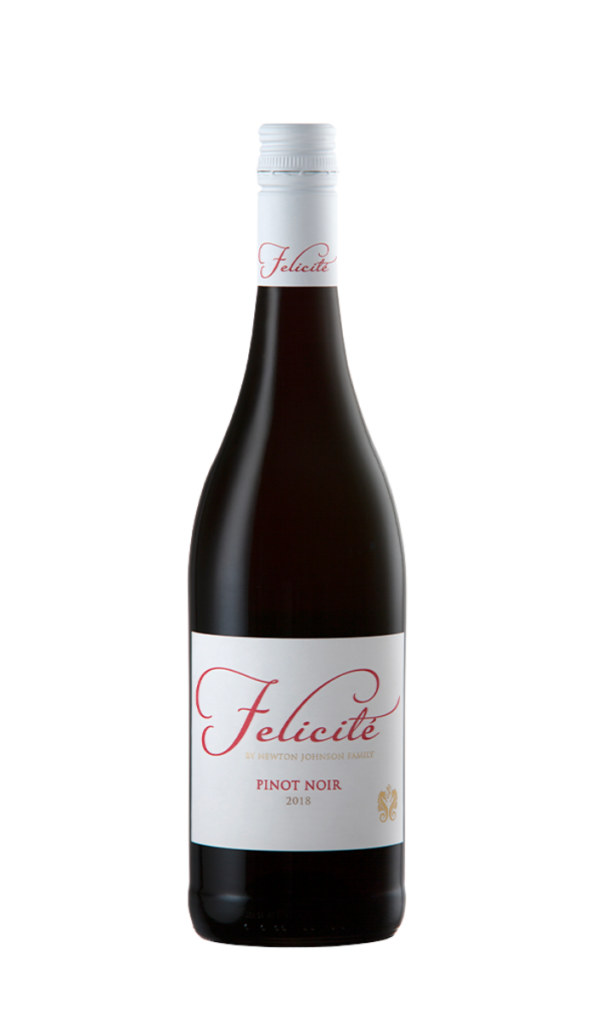 The Newton Johnson family are specialists in the growing and making of the Burgundian grape varieties of Chardonnay and Pinot Noir. The Felicité range offers access to fine examples of these wines at prices that won’t break the bank. Discovering Pinot Noir wines can be a supremely rewarding experience, some say the ultimate. The fragrant fruit of Pinot Noir is ever distinct; and the silky, elegant texture is what seduces you in to what may be called the ‘Queen of wines’. We have sourced vineyards along the length of the Cape South Coast and Walker Bay to encapsulate the vibrancy and purity of Pinot Noir in our greater area.

Compelling aromas of an array of vivid red berries, juxtaposed with structured dark fruits. Ignited with lively spiced notes and assorted with earthy nuances. The palate is structured with chewy, fine tannin around a core of deeply flavoured fruit.

Botriver is situated 30km inland and northwest from Hermanus, approximately 20km from the Atlantic Ocean, which also benefits from the cooling effects of the sea breeze that travels unhindered over an undulating landscape. It is characterized by mild to cool temperatures during the ripening months of January to March with an average yearly rainfall of 550mm . The Upper Hemel-en-Aarde Valley ranges from 4 to 8 km in proximity to the Atlantic Ocean . The climate is cool and temperate, where parallel mountain ranges channel the southerly oceangoing winds through the appellation during the summer. These southerly winds in turn create regular sea mists and overcast conditions, moderating the temperatures in the valley. The annual rainfall is 850mm, with 50% falling in the winter months (May – August). Elgin is situated on a plateau between Somerset West and Botriver and is cocooned by mountain ranges, giving the valley a kind of a bowl shape. It has lesser influence from the ocean and slightly more extreme minimum and maximum temperatures, giving it a semicontinental type of climate. Its cool climate can be attributed to its altitude (300 to 800m) with an average mean temperature of 19.5°C. It also has an abundant rainfall of 1 000mm per annum.

This is the 3r d straight vintage that was warmer and earlier than the average. The preceding winter had decent rain, though was quite poor in terms of accumulated cold temperatures. Fortunately, there were no major abnormalities with budding in the last week of August, a week later than ’15 and ’16. A sustained, dry and warm summer kept the vine canopies relatively modest in growth vigour, and the crop was lower than average. A significant event was the 50mm of rain received on the 27t h January as the first parcels of Pinot Noir were being harvested. This resulted in a delay in ripening for everything else on the vine, with moderate temperatures allowing grape flavours to develop without sugar accumulation. The warmer Botriver vineyards were harvested first between 19t h – 25t h January. Elgin followed on the 17t h February, and the Upper Hemel-en-Aarde Valley between 24t h and 28t h February.

The grapes are packed in to large-surface area crates to limit crushing of bunches. The day’s harvest is cooled down overnight to 8ºC in the winery ’s refrigerated cold room. Bunches are sorted on a conveyor, destemmed, and fall directly to the fermenter. Some parcels also contain a discretionary percentage of whole bunches together with their stems. Cold maceration ensues for 4 to 6 days at 8 to 10°C. All parcels are fermented with indigenous yeasts, and only pigeage (punching down) applied for extraction. After pressing the wine is racked and left to complete its malolactic ‘fermentation’ and maturation in old er oak barrels.