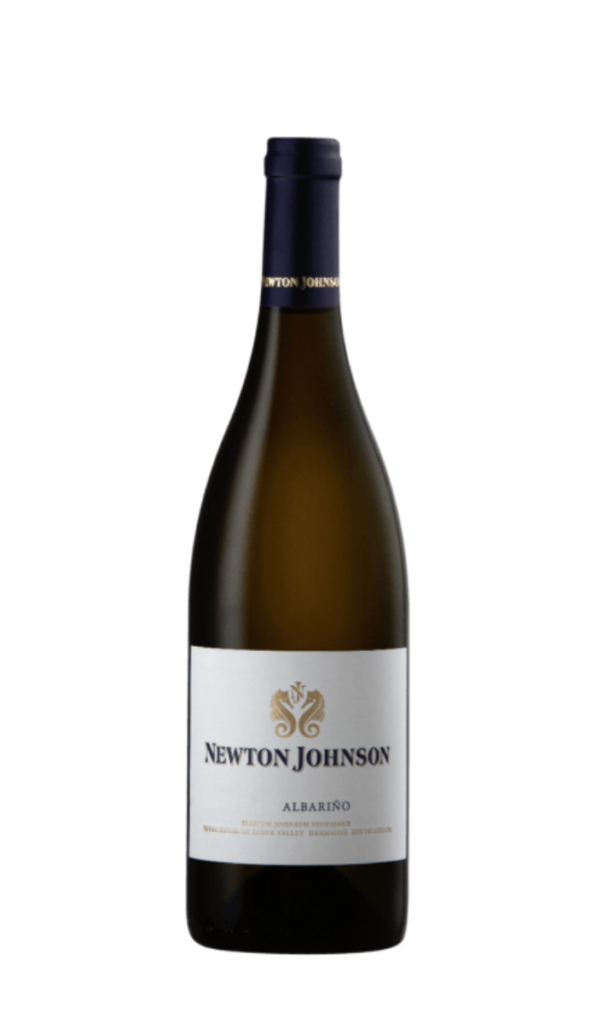 This is the first Albariño to be produced in South Africa, after the Newton Johnson family imported the vine material of this fragrant variety to the Cape with designs on establishing it as a harmonious pilgrim to the maritime conditions of the Upper Hemel-en-Aarde Valley. The grape has its origins on the wet and cool Atlantic north-west coast of Spain, where monks are believed to have brought it from the Rhine River in central Europe centuries before. Its native soil is of Granite origin, similar to ours, where it expresses subliminal definition, almost Riesling-like florality and complexity.

WINEMAKER’S TASTING NOTE
An opulent concentration of crisp and complex fruit and redolent white flowers. The pungent base of ripe limes, tangy nectarine and quince fruit is softened with a mealy beeswax character. Drifting scents of apple blossom and honeydew deliver some alluring top notes. The waxy texture envelops the palate, succulent fruit in the middle, and the flavour protracted by refreshing acidity in the finish.
ANALYSIS
Alcohol by volume 13.8 %
Total Acidity 6.6 g/l
pH 3.3
Residual sugar 2.3 g/l
LOCATION & CLIMATE
These two vineyards lie respectively on north and south facing slopes at altitudes of 250300m, in the porphyritic Granite soils of the Upper Hemel-en-Aarde Valley. This appellation ranges from 4 to 8 km in proximity to the Atlantic Ocean. The climate is cool and temperate, where parallel mountain ranges channel the southerly oceangoing winds through the appellation during the summer. These southerly winds in turn create regular sea mists and overcast conditions, moderating the temperatures in the valley. The annual rainfall is 850mm, with 50% falling in the winter months (May – August).
APPELLATION:  Upper Hemel-en-Aarde Valley
VARIETIES:  100% Albariño
SOIL:  Deep decomposed granite and some clay, with fine 2-5mm gravel.
ASPECT North-West and South facing. Slope of 13%.
TRELISSING:  7-wire Vertical Shoot Positioning (VSP) with movable wires
AGE OF VINES:  6 to 18 years (grafted on to 10 year old rootstock in 2013) PRUNING:  Cordon
VINES PER Ha:  3333
AVERAGE YIELD: 7-9 tons/ha (45-58 hl/Ha)
Growing Season & Harvesting An unprecedented vintage with remarkably long ripening. The growing season started off with rapid and even budding due to some warm spikes in the middle of September. Abundant rain fueled the growth of the vines under mild temperatures, where we managed to avoid any mildew issues with a massive deluge of rain in the middle of Pinot noir and Chardonnay flowering in late October. The rest of the growing season was characterised by mild temperatures and intermittent rains, with another substantial rain event during veraison. The harvest months of February and March saw us picking in between weekly rains. Botrytis rot was rampant in much of the valley though our crop losses were fortunately negligeable. The bulk of our Chardonnay and Pinot Noir were picked in late February and in to March. The Pinot Noir averaged 105 days of ripening from flowering to harvest, the first time we have exceeded the 100 day mark, that saw beautifully evolved and complex flavours with concentration and fine, ripe tannins.
Winemaking
The grapes are handpicked and packed in to small, shallow crates to limit crushing of the bunches. The day’s harvest is cooled down overnight to 8ºC in the winery’s refrigerated cold room. The bunches are hand-sorted on a conveyor table, destemmed and crushed, falling directly into stainless steel tanks where, after a few hours of skin contact, the juice is allowed to drain into lower tanks for settling. The juice is settled overnight (no enzymes used) and racked to large concrete eggs, stainless steel, with a smaller component in old foudre, for spontaneous fermentation. No sulphur was added before fermentation. Maturation & Bottling Matured for 8 months in concrete eggs (42%), stainless steel (45%) and old wooden foudre (13%). No fining, coarse filtration and sulphur adjustment before bottling.