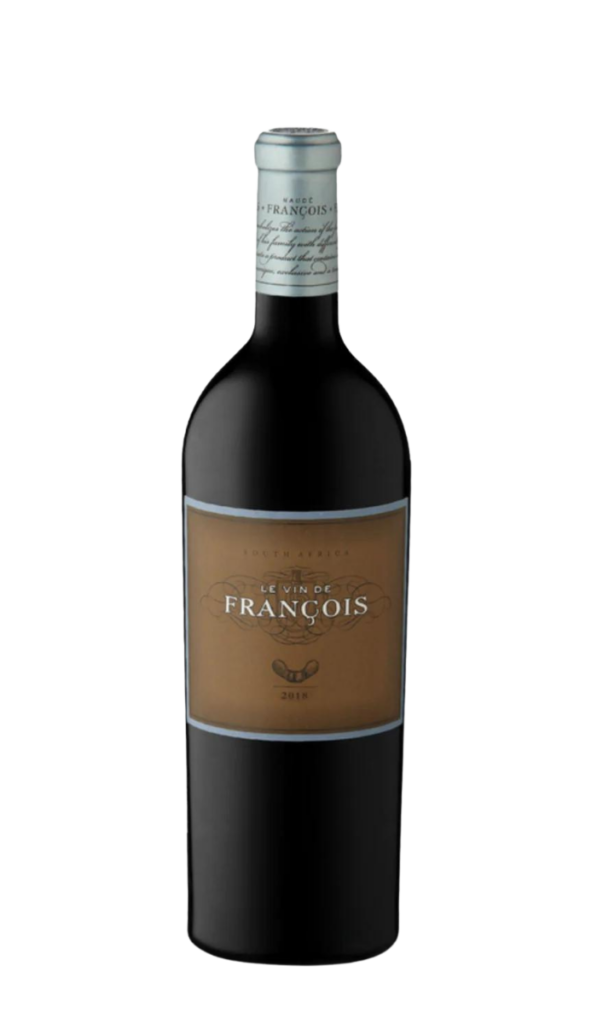 A very special wine – 100% Pinotage, blended from best barrels from about 8…10 best pinotage producers of South Africa: Kanonkop, Beyerskloof, Lanzerac, L’Avenir, Delheim and Simonsig in most of vintages. Grangehurst, Wildekrans and Rhebokskloof included also in some, and Rijks for younger vintages as well. Older vintages were available only from a special auction, sold out in one day.

Tasting notes:
“The wine has deep and dense colour with an attractive dark purple/ruby at the rim.  A reserved but open nose, rich in character with notes of black cherry, lead pencil shavings, stewed prune and black currant complimented by touches of red berry fruit compote.  Compact and polished on the palate, with stylish tannins, it opens up to reveal tangible black fruit and dark chocolate enveloped in vibrant Christmas cake notes. The rich and complex finish, typical of Le Vin de François, shows length, incredible balance and refined lingering flavours.”

Some outstanding wines were produced in 2008 with slightly lower alcohol contents.

The cooler weather conditions and rain showers preceding the harvest had a big influence on the ripening of the grape, and contrary to 2007, the fungal disease pressure was very high, which required effective spraying programs to reduce harvest losses.

The good rainfall after the 2007 harvest ensured sufficient build up of reserves for budding a d that coupled with cold temperatures during end of May and early June resulted in much more even bud break generally.

The good winter rains led to vigorous growth which was aided by follow up rains during spring. When budding occurred about 10 da s later than normal, it was the first indication that the harvest might possibly be late. Early estimates of a bumper crop never materialized due to the influence of cold, rainy and windy conditions during crucial periods of the grapes’ development.

Although official weather data from Stellenbosch shows that January and February 2008 were substantially warmer than 2007 (hours above 30°C), growth in the canopies were much better, due to more rain at regular intervals during spring and early summer.

Later ripening varieties like Cabernet Sauvignon and Shiraz were more affected by he inclement weather conditions and resulting high fungal disease pressure, and therefore initial pre ictions were “an average year for quality, with promising wines from grapes that ripened early, like Pinotage”.

Due to the delayed ripening, the harvest commenced at least two weeks later than usual.

It was a difficult, long harvest season with slow ripening in mid- and late season cultivars especially. Rain during the harvest adversely affected varieties like Sauvignon blanc and Chenin blanc with botrytis infections, and disease pressure remained high throughout.

Despite the rain in February, most of our Pinotage blocks were less affected by disease and rot due to the grape variety’s tough skin or because of being harvested before the rain; especially the majority that come from low-yielding dry-land bush vines.

Excellent grape analysis were obtained once again, with good to high sugars, good pH analysis (except late cultivars) with fairly high malic acids. Early indications were very good primary fruit with maybe a touch less intensity than 2007. As one producer said: “Pinotage is similar to those of 2001, when they showed more of their Pinot Noir side”. From our producers: “Great wines with excellent classic balance”.

(all from Stellenbosch Wine of Origin area – Vintage 2008) Alphabetical order

The grape that were used to make this wine, comes from the farm Aalderhorst in Stellenbosch. Grown in deep red/yellow soils with a South Western aspect and a yield of only 6 tons per hectare (36Hl/Ha). Matured for 12 months in a new 300 litre French oak barrel.

From 13 year old bush-vines, “The Protea Pinotage”, grown on the lower slopes against the Klapmutskop, of the family’s Vera Cruz Estate overlooking Table Mountain in the distance. Made and matured at Delheim in new French oak barrels for approximately 14 months.

“Beautiful deep red colour. Volatile nose of ripe plums and black cherries, with a touch of spicy oak. The palate is full and a complexity of flavours fills the mouth on swirling,with great tannins and well balanced acidity on the finish.”

From the ‘coffee-stone’ soils of this renowned Estate, nestled against the slopes of the Bottelary Hills outside Stellenbosch. Perfectly matured in their underground cellar in third-fill small French oak barrels, to retain freshness and fruit.

“Deep red in colour. A complex nose of black cherries, dried banana and subtle wood aromas. The palate is full of ripe cherry flavours with a touch of coffee and soft juicy tannins, perfectly balanced to ensure a long and lasting finish.”

From 20 year old dry-land bush-vines on Hutton soils. Grown on a South Western slope at about 250 metres above sea level, to catch the cool evening breezes of the nearby Atlantic Ocean.

Fermented in traditional open fermentors with two-hourly punch­ downs and then to new small French oak barrels for MLF and maturation of approximately 15 months.

“Intense deep red colour with a purple rim. The nose has blackberry and plums mixed with a touch of mocha & coffee. The palate is full of intense spicy, rich dark fruit flavours –blackberry, blackcurrant and cherry. The ripe and firm tannins gives a long pleasing finish.”

The first wine made from the farm’s vineyard high up on the North-Western slope of the Bothmaskop just outside Stellenbosch, on the way to Jonkershoek. Matured in a single 225 litre ‘Chateau Ferre’ French oak barrique.

“Intense deep crimson colour with spicy – fruity nose. The palate is full and juicy with firm but smooth tannins. Elegant with a long finish.”

The second wine is from one of the highest vineyard blocks on the Northern slope of the Bottelary Hills. A bush-vine block that gives very Iow yields with intensely flavoured berries. Aged in new small French oak.

“This ‘wild ferment’ wine has a very deep purple-red colour. A concentrated nose of plums, cherries and blackberry is followed by a complex taste of fruit and wood with firm tannins and good acidity – perfect for long maturation potential.”

Again two different components. Both from the oldest bush-vine block on the farm – a low yielding dry-land vineyard, about 180 metres above sea level looking onto the picturesque ‘capital’ of the winelands – Stellenbosch. The first, consisting only from ‘free­ run’ wine that was fermented in tank and drawn off after alcoholic fermentationinto a new 225 litre Vicard French oak barrel for malolactic fermentation and maturation.

The second, fermented and matured in a new 500 litre French oak vat. Pressed after fermentation and returned with it’s press­ juice for MLF and further maturation.

“Extremely dark, almost black in colour. Slightly restrained nose, but with big & bold flavours in the mouth. Lots of extract and a tremendously long aftertaste – the backbone of the blend!”

Made from grape grown on the higher altitude vineyards of the farm Oude Nekt r in the beautifulJonkershoek Val y     nowned for meticulous nurturing from vineyard through to ba rel maturation and beyond.

“Deep red colour with a youthful purple edge. Beautiful sweet Pinotage nose of plummy fruit and ripe cherries with a hint of dried banana. The ripe fruity flavours are echoedon the palate and the wine has an extremely pleasing taste that lingers, with fine tannins and a superb balance.”

Produced from 15 year old bush-vines growing i the famous ‘Redhill’ vineyard on a weathered shale soil. Picke at full phenolic ripeness to express maximum fruit character, with soft tannins. Matured in a new 225 litre oak barrel made with tight-grain staves from the Allier forest in France.

“Deep ruby-‘fed colour. Intense nose of ripe black cherries with a touch of vanilla-oak. The wine has ripe plum and sweet, nutty Christmas pudding flavours on the palate, withsmooth integrated tannins. Lots of juicy fruit and elegance with perfect balance.”

Francois qualified and then practised as a pharmacist for 18 years in his home town of Pretoria, before making the break to Stellenbosch and turning a passionate hobby into an extremely successful career. He first tried his hand a winemaking in 1991 and joined L’Avenir Estate in 1992.

This past chairman of Les Chevaliers du Tastevin de Pretoria (one of the first wine Guilds in South Africa) and self­ taught winemaker has used his unerring instinct and skills as a pharmacist to take on the best winemakers in the world and has proved himself their equal.

He has earned many awards and collected an enthusiastic following at home and abroad, where he has excelled in competitions such as the Chardonnay du Monde and the International Wine and Spirit Competition in London, from which he has brought home the Perold Trophy (for the best Pinotage in the world) three times.

L’Avenir Pinotage have also been a winner in the ABSA Top 10 Competition for a record 7 times. Since his etirement he has become an honorary member(Keepe of the Key) of the prestigious Cape Wine Makers Guild , an honorary member of The Pinotage Association and is e current Chairman of TheStellenbosch Wine Circle.

The wing nut symbolizes the actions of the founder – clasping together ideals of his family with different wines from a variety of terroirs to create a product that contains all the properties of something great; unique, exclusive and a touch of “magic”!